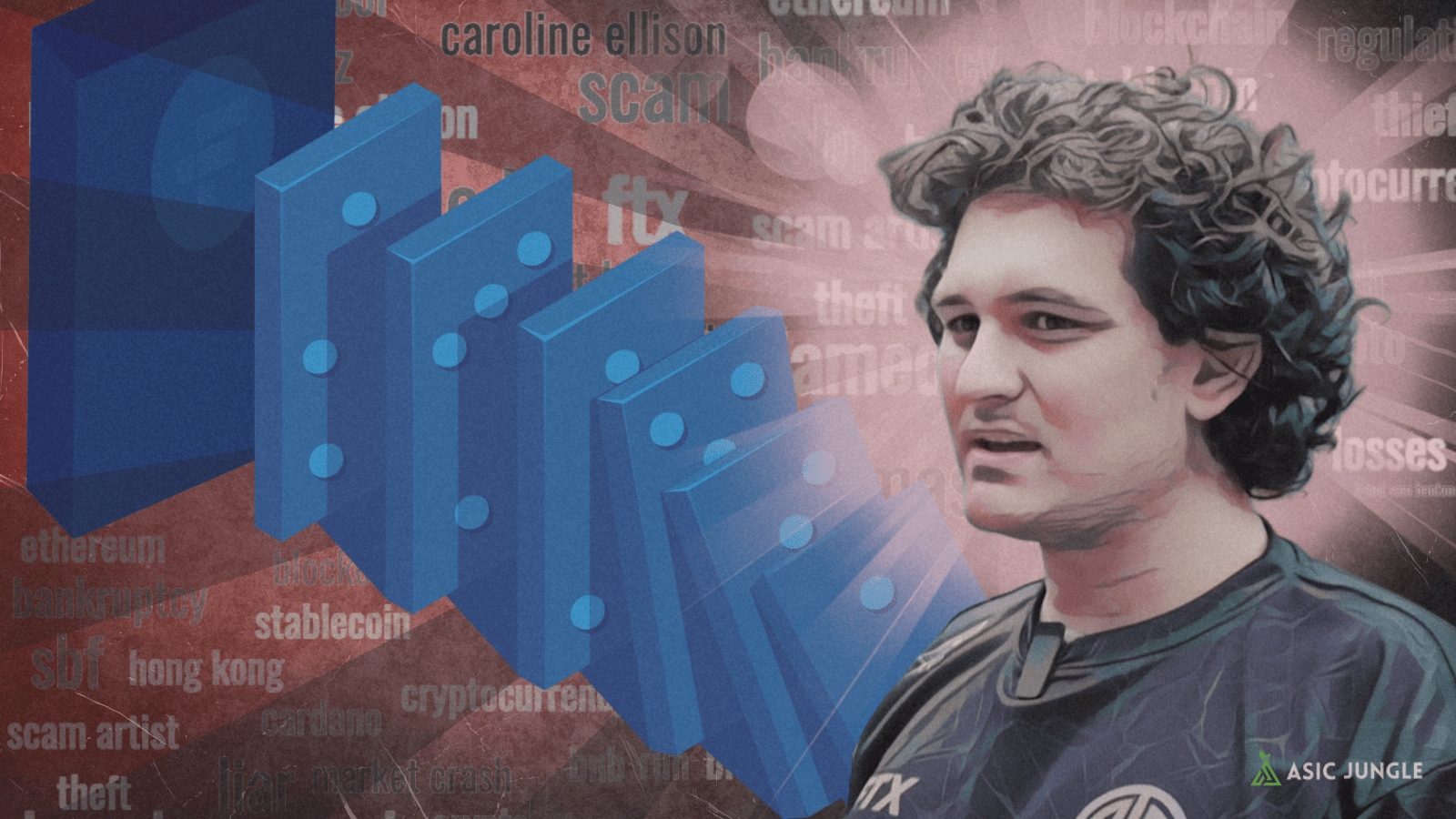 What started out as exchange behemoth Binance potentially buying a major competitor FTX quickly took a turn for the worse as Binance sold roughly $500 million worth of FTX tokens and sparked a chain of events which resulted in FTX filing for bankruptcy. The event has escalated into major losses for FTX users worldwide and has highlighted systemic risks in the cryptocurrency industry which were largely ignored beforehand.

The event has sparked a wider movement towards exchanges validating their reserves to back user deposits and has also catalyzed widespread fear and withdrawals across the crypto industry. Bitcoin is being withdrawn from exchanges at close to record levels and prices of crypto assets are incurring a sell-off which poses an existential crisis to countless enterprises and investors in the industry.

In this latest ASIC Jungle deep dive, we review one of the biggest shock to hit the crypto ecosystem since the COVID-19 sell-off of March 2020. We consider the implications for the broader industry and how the event has uncovered a major gap in liquidity, security, and risk in an nascent field where risk-taking investors often adopt an outlook of ignorance is bliss.

Concerns initially started emerging early in November regarding Alameda Research’s massive exposure to the FTX $FTT token. Alameda Research is a sister company of FTX which is a fund that concentrates on quantitative cryptocurrency trading strategies. Alameda Research was intended to operate largely independently of FTX but the revelation that roughly $6 billion of the $14.6 billion balance sheet was concentrated in $FTT, a token which is centrally controlled and printed at discretion by FTX, sparked concern over the financial health of the FTX ecosystem. With $8 billion in liabilities on the Alameda Research balance sheet, the bankruptcy of the firm leaves a potential $8 billion liquidity hole in the market but the implications of exchanges FTX and FTX US filing for bankruptcy are much larger, posing losses to individual investors, venture capital companies, and the broader crypto industry.

A key event in the leadup to the bankruptcy was Binance deciding to offload $FTT holdings which they had received in an equity deal with FTX. Binance began dumping roughly 23 million FTX tokens on November 6th, worth roughly $529 million at the time. This initiated a steady sell-off which quickly exacerbated when FTX halted withdrawals on November 8th. As the events unfolded over the course of two weeks, this brought $FTT from roughly $26 to less than $2. 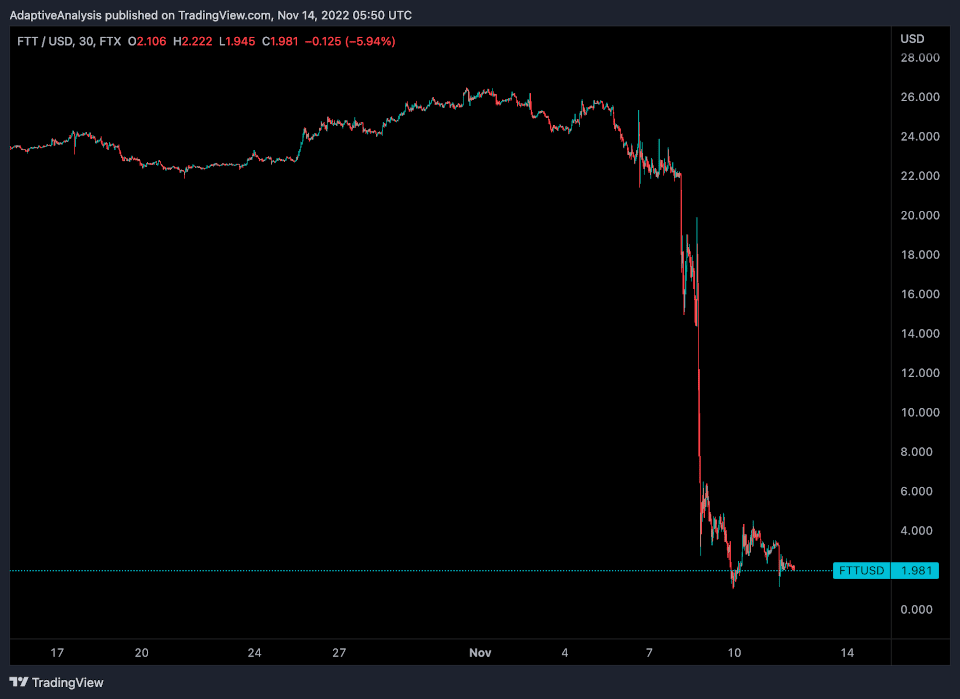 A potential saving grace emerged on November 8th when Binance considered buying FTX to alleviate stress in the cryptocurrency market. However, the deal fell through only a day later after a few hours of Binance checking the books of FTX, securing the faith of FTX and sparking a broader sell-off throughout the crypto industry. According to data from CoinGecko, roughly $140 billion has been wiped from the crypto market cap over the past 14 days, a 14% decline.

Implications of the FTX implosion

The Binance-FTX debacle has broader implications for the cryptocurrency industry and its standards. Up until late 2020, the cryptocurrency market was largely composed of risk-taking retail speculators on the demand-side and quickly funded and developed projects on the business-end. There was little institutional involvement and the standards surrounding risk management and transparency were vague to say the least.

The significant price appreciation which took place from late 2020 to the latter end of 2021. This upswing led to an influx of institutional investors and a greater focus on regulation and industry practices naturally came with it. A host of businesses like Gemini brought their entities more in line with regulatory guidelines but a large share of the industry continued to operate in an unregulated and oftentimes opaque manner.

Projects with native tokens were particularly vague as they mostly retained control over how much they inflated the supply of their token base and could change the functionality and use of tokens at their discretion. The financial health of many industry enterprises also became a black box as investors became willing to invest capital in all varieties of risky upstarts amid bullish market conditions.

The pendulum has swung in the other direction. Businesses which could easily raise funds with little more than a whitepaper during the market upswing are now being put under intense scrutiny regarding their capital health and ability to meet debt, depositor, and investor liabilities.

This has led to a broader movement towards more transparent practices across the industry, a healthy development amid dire market conditions. Given the lack of transparency surrounding FTX’s liquid, many exchanges are putting in place proof-of-reserves standards to provide their users with a way to verify that the exchange has the funds to meet user deposits.

A host of major industry exchanges such as veteran exchange Kraken, derivatives behemoth BitMEX, and the ubiquitous Crypto.com have implemented proof-of-reserve programs to give their users confidence and provide them with a technical way to authenticate the funds which the respective exchanges hold. What is clear is that this movement is becoming popular as a trust signal amid the current market conditions but with a wide variety of ways to introduce proof-of-reserves, it remains unclear the robustness of different methods and whether they have any technical shortfalls.

The FTX downfall is still unfolding. Only a few days ago, founder Sam Bankman-Fried emphasized that the FTX US arm remained unimpacted. However, since then, withdrawals from FTX US have been halted and the entity has been included alongside FTX and Alameda in the bankruptcy proceedings.

The full scale of the fallout from the FTX implosion remains to be seen. What is evident is that the effects of its demise are reshaping the broader industry. They are shining a light on the security gaps and shady practices that are ingrained in the very core of the industry. They are also putting in place a sense of urgency for major service providers to provide a greater level of transparency and professionalism for what has historically been a risk-on marketplace.