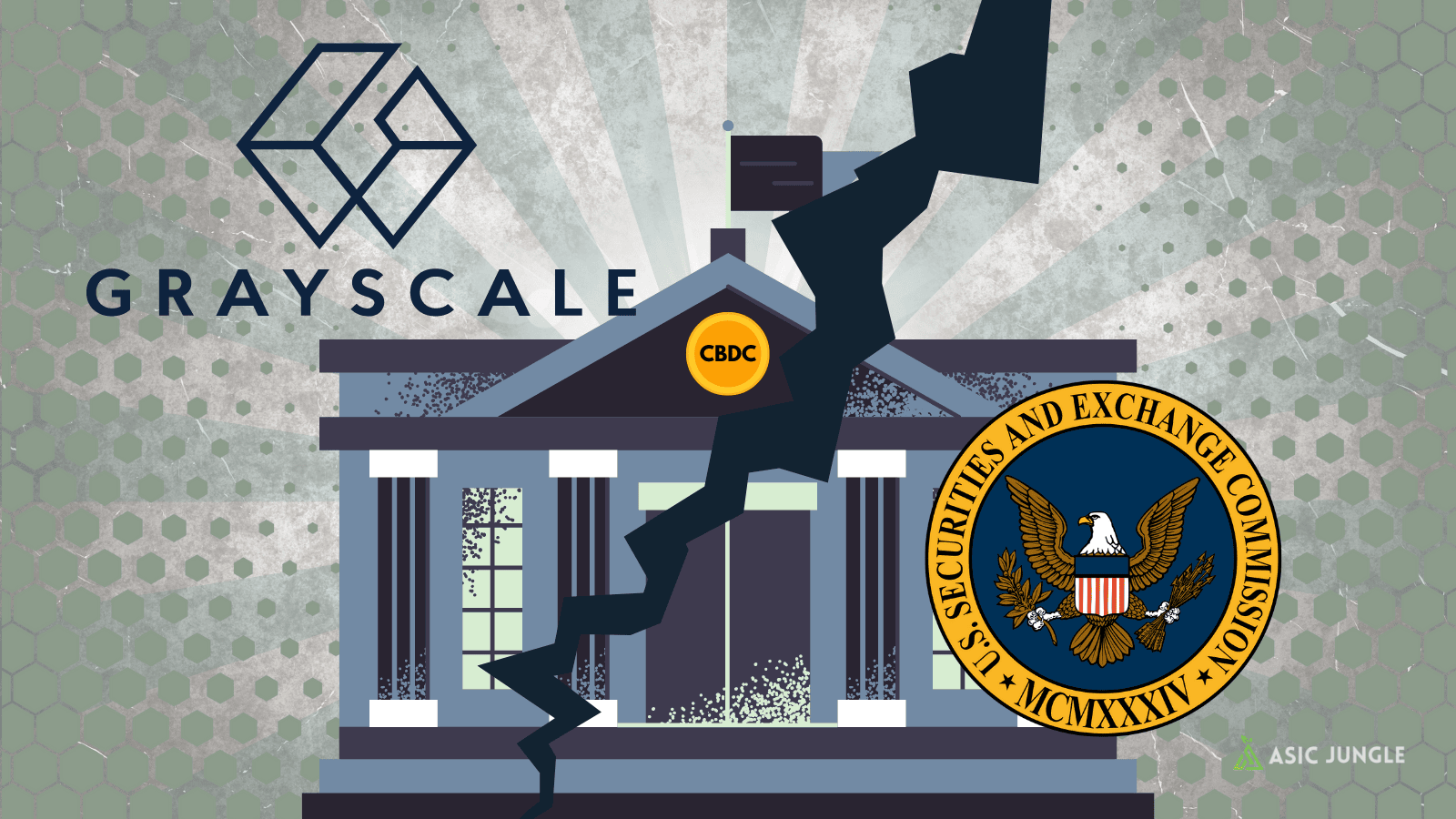 Grayscale vs SEC: Is the Government’s Goliath protecting CBDCs?

It’s been roughly a year since the Securities and Exchange Commission (SEC) approved the first Bitcoin Futures ETF, the initial step to getting a Bitcoin Spot ETF in the United States of America (USA). Since then, many countries around the world have greenlit various Bitcoin Spot ETFs – including Brazil, Germany, Canada, and many.

Despite being the most developed financial market in the world, the US has continued to reject all applications for Bitcoin Spot ETFs. The SEC has been a critical bottleneck in advancing the US financial infrastructure surrounding the Bitcoin ecosystem. At the same time, the Federal Reserve is researching its own central bank digital currency (CBDC).

With Bitcoin Spot ETF applications being developed and submitted on one hand and a CBDC being researched on the other, a clear conflict of interest emerges. In this ASIC Jungle analysis, we intend to explore and understand both Futures and Spot ETFs by diving into their risks and differences. We will consider if the creation of a US CBDC may be impacting the SEC’s decisions in approving or rejecting Bitcoin Spot ETF applications.

Bitcoin ETFs across the years: Futures vs Spot

Despite Bitcoin’s nascency, the asset and the network already have a deep history in many fields, especially in the financial markets. One could argue that Bitcoin’s first foray into the world of legacy finance was with the creation of the Grayscale Bitcoin Trust (GBTC) at the end of September 2013. In 2016, Grayscale pursued an ETF with the SEC, which they later dropped due to the market not being mature enough.

Grayscale would return to their pursuit of an ETF many years later in 2021 with a much more liquid and vastly more developed Bitcoin market. The market did appear much more ready for an ETF. The chief of the SEC Gary Gensler was commenting on the possibility of a Bitcoin ETF as Grayscalke was filing to convert their trust into a Spot ETF. As with many other Spot ETFs, the SEC would ultimately reject and deny Grayscale’s submission.

The rejection resulted in Grayscale filing a lawsuit based on alleged discrimination. The SEC has already approved a handful of Futures-based ETFs, but no Spot ETF, regardless of the increased risk, complexity, and decreased returns that Futures-based ETFs face.

Exchange Traded Funds, or ETFs, have become very popular products in the past few decades. They are the go-to financial tool for passive investors, and these products are the ones that made BlackRock and Vanguard the financial behemoths they are today. One of the main advantages that ETF products have is that they track the underlying assets to a very high degree of precision. This is particularly relevant to Grayscale given that their GBTC product trades at vast discounts and premiums to net asset value (NAV).

ETFs are a convenient tool that still carries all the inherent risk of the underlying. These products facilitate access to the underlying asset in a traditional and safe fashion. Futures-based ETF carry all the risks of the underlying with extra complexities and costs. For instance, every time a set of futures in an ETF expires, the managers have to buy new ones in the market. The technical name for this is known as “Contango Bleed”.

Apart from the contango bleed, which has already lost Bitcoin Futures ETF investors around 1.7% of value, there are also increased costs to investors due to higher management fees on the ETF. Moreover, all of these ETFs are based on pure cash-settled paper contracts, which destroys demand for the underlying and creates counterparty risk where there shouldn’t be any. 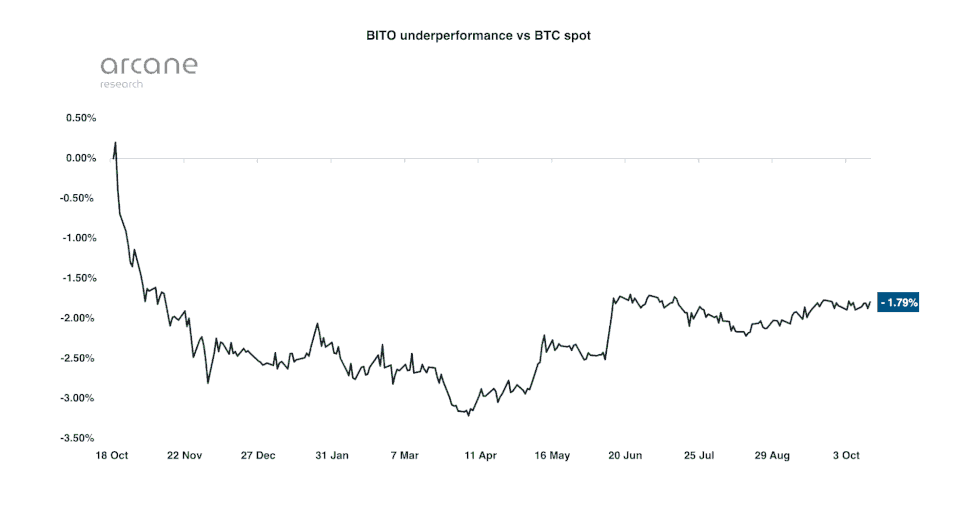 In comparison with Futures ETFs, Spot based ETFs are very simple. For every dollar that enters the ETF, there is a dollar of real Bitcoin bought in the open markets and put under cold storage with a trusted custodian, creating real demand for the asset. Instead, on the first day of the futures ETF, we had around $1 Billion of volume that went into paper contracts making Wall Street bankers rich in fees and denying real demand for the limited supply of real Bitcoins.

One of the stated reasons for the SEC’s actions is regulatory oversight and the potential for the Bitcoin spot markets to be vulnerable to manipulation. While on air in a CNBC interview, the SEC Chief Gary Gensler explained:

“[Bitcoin futures contracts are] a product that’s been overseen for four years by a U.S. federal regulator, the CFTC, and that’s being wrapped inside of something that’s within our jurisdiction called the Investment Company Act of 1940. So, we have some ability to bring it inside of investor protection.”

While it is true that Futures contracts have been and are under federal oversight, this doesn’t mean they are free of manipulation. Every year billions of dollars in fines are levied for the manipulation of markets, like the recent $1.2 billion fine for Oil and Gas futures manipulation.

Is the CBDC development impacting the rejection of ETF applications?

Why have so many Spot Bitcoin ETFs been rejected when they are highly similar to Futures Bitcoin ETFs which have added complexity? Is the SEC taking an external factor into account in these applications?

Some may speculate that the SEC and Federal Government is trying to clamp down on Bitcoin’s rise in favor of a CBDC. Once you take into account that the FED is pushing for a CBDC and the government is in favor of it, a conflict of interest emerges whereby matters that benefit the Bitcoin ecosystem may be a risk to the success of a government-issued CBDC.

With several major countries after approving Spot Bitcoin ETFs, US regulators may struggle to hold off such an instrument in perpetuity. However, they may indeed be wishing to disburse and see uptake in their CBDC before such an instrument is released to the masses.