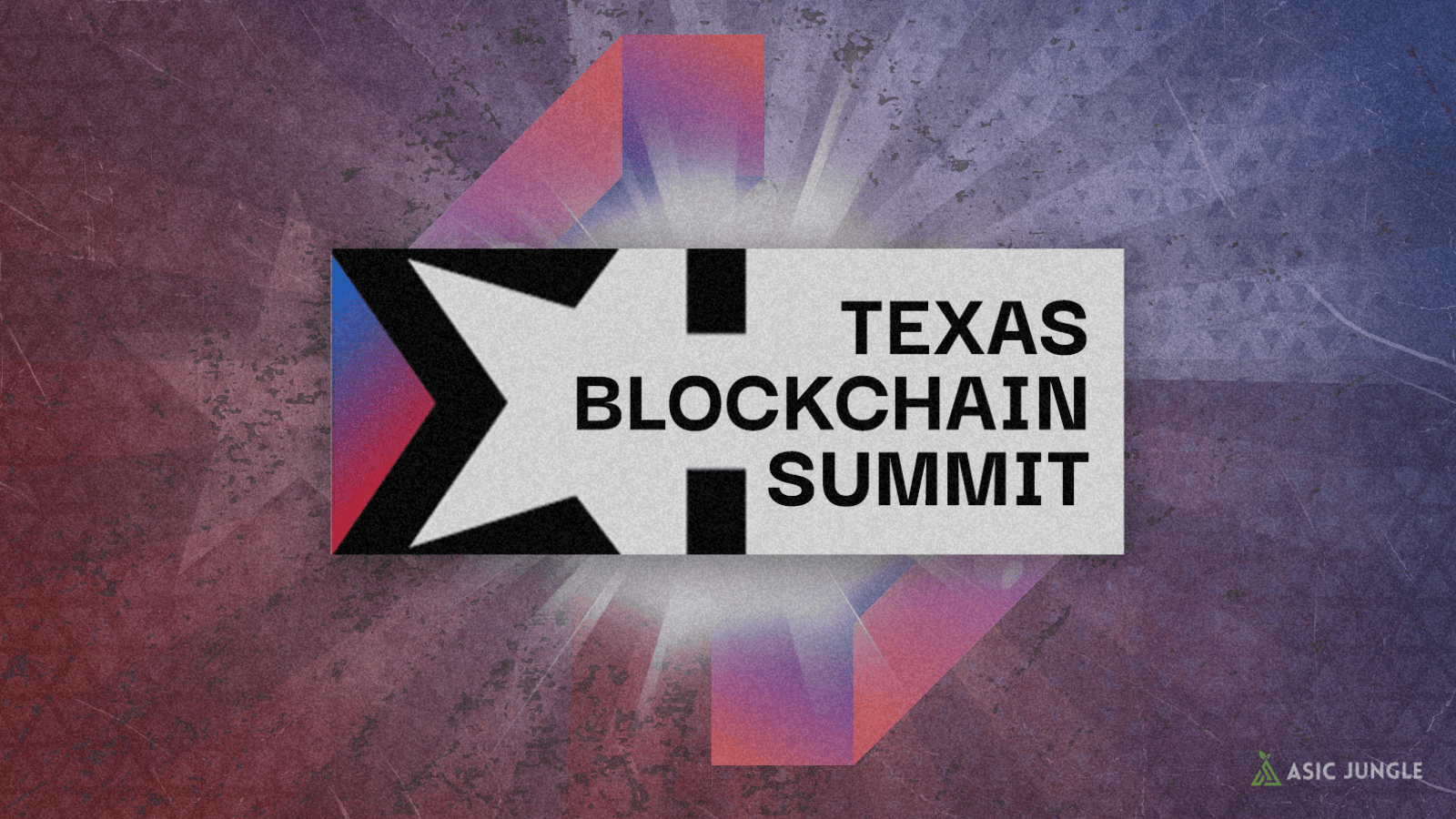 ASIC Jungle’s Inside View of the 2022 Texas Blockchain Summit

Texas is home to some of North America’s largest mining operations. Individuals and companies that mine Bitcoin and other cryptocurrencies gravitate towards Texas’ lightly regulated energy policies, as well as the abundance of space and natural resources in the state.

Cryptocurrency mining offers new potential for a state that will find itself on the precipice of an energy revolution in the coming years. By aligning itself with the future of Bitcoin, Texas is positioning itself strategically to be able to grow alongside an exciting and rapidly growing industry, similarly to how it did with oil.

Bitcoin has strong advocates across the state of Texas, and many of the top minds in the spaces of Bitcoin mining and development came together on November 17th and 18th of 2022 for the annual Texas Blockchain Summit in Austin. Powerful political players made appearances at the conference to discuss policy developments to enable ongoing development in the space.

Among the forward-thinkers in attendance at the summit in Austin, Texas was the team behind ASIC Jungle—a top-tier broker that empowers Bitcoin miners across the globe by plugging them into the mining community and providing access to the best mining hardware at the best prices.

If you weren’t able to make it to this year’s Texas Blockchain Summit, fear not. Read on for an overview of the players and ideas that were making waves at this important event.

History of the Texas Blockchain Summit

Like many initiatives in Texas’ booming blockchain landscape, the Texas Blockchain Summit is a new undertaking. In 2021, the inaugural event was held in Austin over a single day to a packed audience of around a thousand attendees.

The 2022 edition was expanded, taking place over two days. As Chad Harris pointed out, given market downturns, attendance in year two signified an impressive commitment to innovation and development in the space.

2022’s event featured plenty of big names in the blockchain landscape. These included Anthony Pompliano—host of the popular The Pomp Podcast—who frequently facilitates conversations with many of the most important names in Bitcoin and finance.

A number of prominent Texas political figures were in attendance at the Texas Blockchain Summit. Most notable perhaps was Senator Ted Cruz, who is known as a Bitcoin investor and for having supported blockchain-based technology in the past. At the conference, Cruz stated that he wants Texas to serve as an oasis for Bitcoin and crypto more widely.

Andrew Yang—who ran for president in 2022 and in New York’s democratic mayoral race in 2021 on pro-Bitcoin platforms—was also a speaker at the event.

Peter McCormack—host of the What Bitcoin Did podcast—facilitated the conversation with Ted Cruz, while Rachel Wolfson from Cointelegraph moderated an enlightening conversation entitled “Bitcoin for Good.”

Other voices featured at the 2022 Texas Blockchain Summit

Panels of state legislators included speakers from both sides of the American political spectrum, who found themselves reaching common consensus about the importance of supporting the growth of crypto in Austin, Texas.

Texas Democratic representative John Bucy spoke of the FTX situation as a learning opportunity for other initiatives to remind themselves of the values that should be central to those interested in blockchain, crypto, and mining.

Over the summit’s two days, more than fifty speakers took to the stage, presenting a number of highlights.

Founder and president of the council Lee Bratcher was tasked with contextualizing the FTX controversy for the audience, and did so with aplomb.

Lee Bratcher's address to the audience

Bratcher offered examples of assurances that exchanges could provide to customers going forward, including real-time proof of reserves and audits. He also spoke on the importance of educating users about self-custody strategies.

As Bratcher rightly pointed out, Bitcoin itself operates without flaw, and users can protect themselves from disreputable enterprises like FTX by becoming equipped with self-custody methods, rather than relying on exchanges.

On day one of the summit, awards were presented to attendees. Mackenzie Sigalos—a technology reporter for CNBC—took home the journalist of the year award, while Texas Senator Angela Paxton was awarded legislator of the year. Kristine Cranley from PM Squared Financial was awarded educator of the year.

2022’s Texas Blockchain Summit came at an interesting time, in the middle of the dramatic downfall of the FTX cryptocurrency exchange.

FTX’s fall sent shockwaves through the crypto market, with the public showing rightful skepticism towards shady centralized exchanges and their proprietary tokens.

Optimism in the face of FTX's failure

Among speakers at the 2022 edition of the Texas Blockchain Summit in Austin, the consensus was optimism and resolve in the face of this adversity in the market.

Crypto adoption and mining are both growing at staggering rates across the world. The Lightning Network and Web3 initiatives are increasingly making Bitcoin both more lightweight and powerful.

About the Texas Blockchain Council

The Texas Blockchain Summit is organized by the Texas Blockchain Council. In addition to Austin, Texas, the council also puts on events in Dallas, Houston, and Fort Worth—all centred around helping the Bitcoin and crypto communities grow.

The Texas Blockchain Council is all about promoting the interests of member companies and pooling the influence of its participants in order to educate the government and public about the benefits of blockchain technology.

The council also promotes initiatives to incentivize increased participation in mining activities in the state.

As many speakers at the summit pointed out, Austin, Texas and its surrounding areas feature some of the biggest Bitcoin mining sites on the continent. Texas is well on its way to becoming the world’s most important Bitcoin mining location, and Austin itself is known as a hub of innovation across a number of technology-related fields.

In addition to the kind of Bitcoin-friendly legislation and access to energy seen in Austin, Texas, another important factor for growth in the industry is access to quality mining hardware at the best prices. ASIC Jungle provides miners with the tools and unmatched service they need to make their mining operations a success.

ASIC Jungle has provided over a hundred thousand ASICs to miners over the past few years. Their volume-agnostic team can provide you with the best level of service and with unbeatable prices whether you’re in the market for thousands of units or a single one.

If you’re looking to sell units, the ASIC Jungle marketplace can give you the ultimate flexibility and convenience.

To stay locked in to the latest developments related to the blockchain, crypto, and mining spaces—including content similar to ASIC Jungle's inside view of the Texas Blockchain Summit in Austin—be sure to follow along with ASIC Magazine.